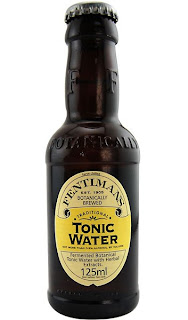 As a kid, I loved bitter and sour beverages. I can remember Sunday dinners at my parents' house - while my Dad and Grandpa had a "scotch and soda" (which to my Grandpa really meant scotch on the rocks) I would often be treated to a sour mix, OJ and grenadine drink. Tonic water was another treat that I would have occasionally. While many bristle at the thought of drinking tonic water straight, I actually rather enjoy the balance of citrus, sweetness and bitterness that can be found in a good bottle.

In the summer, a gin and tonic made with Beefeater gin (I prefer the crispness of Beefeater to the full-bodied character of Tanqueray) with a slice of lemon or lime (I vacillate between the two or sometimes even add a small squeeze of each) is a great thirst quencher and really sets the mood for a mid-late afternoon patio party.

For this post, I assembled a rather large group of tonic waters, ranging from my previous gold standard, Schweppes, to some pricey newcomers boasting artisanal ingredients and manufacturing methods, such as Fever Tree, Q tonic, Fentiman's and Stirrings. Below is a listing of the nine tonics selected. 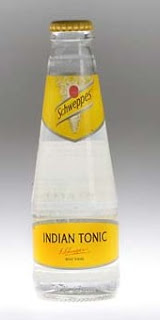 Note: Canada Dry is intentionally absent. After much experimentation, I have determined that I have a strong preference Schweppes (domestic) to Canada Dry which has a sweet, cloying flavor and not enough bitterness. For that reason it didn't make it to the finals.

All tonics were packaged in small glass bottles except Hansen's and 365 which were served in a can. Schweppes (domestic) and White Rock had plastic screw-caps while all the other bottles had a classic crown-type bottle cap. Purists tend to like the small glass bottles and believe that they offer superior carbonation.

The tonics were tasted blind by Rob and me. Following are our tasting notes and scores. Where tonics were close in score, I attempted to differentiate by tasting back to back to confirm the ranking.

2. Schweppes
Matt - light flavors. Some bitterness. Sweeter than #1 but less flavorful. Score - 87
Rob - Not much on the opening taste, but then finishes with a bitter attack. Good carbonation. Score - 85 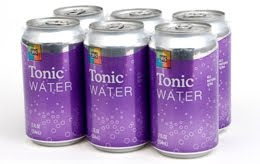 5. White Rock
Matt - Sweet with some bitterness. Not a lot of citrus, but a decent overall balance of flavors. Score - 89
Rob - Light opening with a pleasantly bitter finish. Score - 87 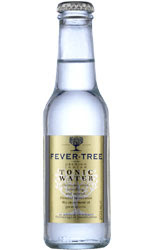 Conclusions: We both agreed that Fentiman's was an extremely fine product - Rob had it as his #1 and I had it at #2. It was the only product that scored in the 90's by both of us. At $3.50 for 125 ml, however I'm not sure how much of this I'll be buying in the future. The Lilliputian bottle is so cute though... Thanks to Rachel for picking this up at Galco's Soda Stop in LA.

The Schweppes Indian Tonic was a revelation for me. I loved the complex flavors and gave it extra points for character. Rob liked the complex flavors as well, but was somewhat put off by the mediciney finish. Unfortunately this product is mostly unavailable here in the US. Rarely seen in stores, I considered it a coup to find this at the Beverage Warehouse in Marina Del Rey. How long they will carry it is anyone's best guess. I may have to stock up. 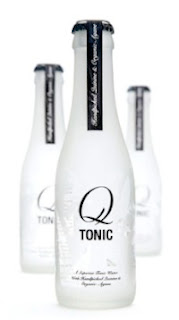 Hansen's did surprisingly well. I usually do not care for it in a gin and tonic because it is not bitter enough. Which, by the way, brings up an interesting point with respect to this tasting; specifically, how will these tonics rate in a classic Gin & Tonic? To answer that, Rob and I have tentatively planned to conduct a comparison of our top picks of these tonics, mixed in a G&T, in the future.

White Rock was an interesting and tasty newcomer that turned out to be my #3 pick. Another rarity picked up at Beverage Warehouse.

Schweppes (domestic) was a disappointment to me. I have long respected its quinine bitterness as a superior ingredient to a proper G&T. In this tasting it did not shine. I will be very interested to compare it with some of the others when we try them mixed in a drink in the future.

365 was only o.k. to me. Rob liked it a bit more and had it tied for #3. It would definitely be worth trying for anyone near a Whole Foods.

Fever Tree had a mediocre showing despite my high hopes for it. It just didn't stand up to the more complex offerings and Rob and I agreed that it had a fairly simple lemon-soda flavor.

Stirrings was uninteresting and a general underperformer, and therefore would not be recommended due to its premium price.

Q Tonic was suprisingly flat in flavor. I found it lacking in character. Rob found it downright offensive. This was probably the second most expensive bottle in the tasting, so I will probably not be buying this in the future. That said, it is being heavily marketed and is probably worth a try for those wishing to try some of the exciting new tonics out there.

Final Notes: This was a long time coming and I had a really good time comparing flavors and ranking this broad range of tonics. I look forward to the "next phase" where we'll have the opportunity to rank these tonics based on their performance in a G&T.
Posted by Matt Schacht at 9:21 PM